Today’s post is my recap to last week’s challenges. If you didn’t follow on last week’s post you can find it HERE. I ended with the following challenges for myself and for you if you cared to join me.
-A week long hiatus from conflict; focusing instead on maintaining Peace in my life and relationships.
-Attempting to eat one completely Paleo meal and day. I didn’t commit to but considering trying a full Paleo day once in the week.
-Getting to CrossFit three times, rather than the two that is becoming my norm.
So how did I do?

As far as peace goes I think I did great. It was easier than I thought and a goal I plan to extend. On a few occasions I found myself escalating in frustration near to the boiling point of an argument and was reminded of my spoken goal and was able to simmer down and think rationally. Wow! Rationality! Who knew that could be so beneficial in the maintenance and growth of relationships?! It was a powerful exercise, not just because I was able to do it and see its benefits, but because I was able to see what a challenge it was at times. How frustrating is it that as an adult I have moments of being more focused on myself and getting what I want than I am on the needs and feelings of the people I love or work with. I know I am not alone in this. We are such a “Me” based culture, I think what I found myself doing is the norm, not the exception.
I am going to keep it going because I think it can bring more change to me and get me closer to being even more awesome. Really though, I felt better in my relationships this week. I felt a freedom to be a more authentic version of myself, more vulnerable and open, but at the same time more willing to compromise, even sacrifice. Sacrifice is SO hard. That has long been an issue for me, the feeling that if I sacrifice in a relationship I am being the weaker party. Not holding my independence or self-worth as highly as I should. And while to a certain extent this can be true, I think I have allowed it to make me selfish and self-focused in my relationships while hiding behind the protection of my right to independence as a modern woman.
Did you try it this week? If so how did it go for you? I really would love for you to share with me!

As for Paleo, I would say my success was more amateur. Amateur may even be a stretch. Early in the week I think it is safe to say that a few days my only Paleo meal was the breakfast I skipped, and while Saturday came close to being a full Paleo day I was a full Paleo fail at the end complete with Wine, chocolate, and even, hold your breath, a GLUTEN cheat! To be honest, I am still struggling to integrate myself into a world where salad tastes good without cheese and Greek yogurt is evil. Furthermore, on the heels of the power of quinoa craze, how can even that be off limits?
I tried to eat more eggs. I replaced peanut butter with almond butter. I limited fruit and skipped my morning yogurt. Coffee obviously stayed (believe me, it is for the greater good) and wine is a serving of fruit in my professional opinion, so I have no interest in removing that. Saturday I did what I do best, and spent the day in the kitchen. I made a delicious Curried Pumpkin Soup and coconut bread. I roasted my own pumpkin seeds to sprinkle on top of the soup which in the end was actually made with butternut squash. Even Wegmans doesn’t have pumpkins in January! Both were delicious, and from my understanding pretty darn Paleo. I shared them with my friend Katie who I hadn’t seen since her wedding in November. A special occasion for both of us… Big for her because, well it was her wedding and for me because I made the cupcakes and cake, my first big baking project. 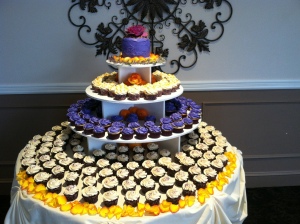 I am hoping to continue my Paleo quest this week. No more seriously than last but I will see where it takes me.

I finally did it. I made it to CrossFit three times last week and it felt great. I planned to try for the weekend but I wasn’t feeling well Saturday morning and opted for my kitchen over the box. I don’t regret it.
This week I made huge progress, a 5am trip to CrossFit before a 12hr day at work yesterday. My friend Davia made it possible and laughed her way through it with me. We laughed at 4am when we both couldn’t sleep and texted each other out of bed, at 5am when we got the “what are you girls doing here so early” look, again at 6 as we raced to the showers, then at 6:50 when we parked side by side in the freezing garage at Upstate. By 5pm when she brought me an admission (yes we work together too) our giddiness had dissipated and we both seemed to be moving at a slow pace. She got a good laugh though when I started a serious round of chest PT (imagine holding a soft mask in your arm and using it to beat someone, gently, all over their back and chest) after a morning of Fran. If she hadn’t been there with me for both I don’t think I could have done either. By the end of the day I felt great, and went to sleep feeling proud, satisfied, and like I could do it again, maybe only once every two weeks though.
Fresh plans, fresh flowers
I feel good. I am proud of myself for doing this and starting to feel good about it. The transition hasn’t been easy, for some obvious reasons like time, and others more sensitive I won’t launch into just yet. But I feel good. I feel like I am moving forward. I feel like I am making changes and as I am actively involved in daily choices for my life my drive and desire for control diminishes. I will expand on this more tomorrow. But think about it for tonight. As I actively make choices about what I am doing, what my body is doing, and what I am putting into, my desire for control for the sake of control is diminishing. I feel empowered instead of helpless or hopeless.
It’s sort of like how keeping fresh flowers in my house all winter distracts me from the frozen world outside.

© [Kateri Allard] and [According to Kateri], [2012-2013]. Unauthorized use and/or duplication of this material without express and written permission from this blog’s author and/or owner is strictly prohibited. Excerpts and links may be used, provided that full and clear credit is given to [Kateri Allard] and [According to Kateri] with appropriate and specific direction to the original content